The first year and a half, from the fall of 1975, twelve individual projects were commissioned. Over half were by Bay Area artists, and the others were by artists who came to present the work in the San Francisco area […] The program was inaugurated on November 6 1975, with two performance pieces by Eleanor Antin, a Southern California artist, who chose to present “King’s Meditation” at the Palace of Fine Arts in San Francisco and the following day the “Ballerina” in the eighteenth-century French galleries at the California Palace of the Legion of Honor […] The second phase of The Floating Museum’s programming was called “Global Space Invasion: Phase I” and introduced into the Museum’s activity collaboration and extension beyond the Bay Area. In May 1977 nine artists went to Europe to create work together or individually in various cities. The following year, in July 1978, new work by these same artists, reflecting their European experience, was shown in “Global Space Invasion: Phase II” at the San Francisco Museum of Modern Art, the final event in The floating Museum’s life. (Foley 1980: 42) 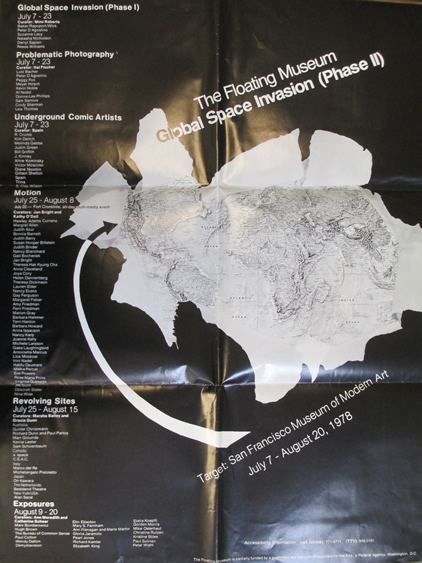