All day exhibition of a floor in the same building as MOCA, which was vandalized by a Chinese youth group. When the group was evicted, Marioni opened the space for exhibition. (Foley 1980: 158)

In 1974 the San Francisco Redevelopment Agency, my landlord, gave the floor above my museum to another nonprofit organization, the Chinese Youth Alternative. In Chinatown there were two main gangs at the time. One was for American born Chinese, and the other, the Wa Ching, was for Hong Kong born. The Wa Ching were my new neighbours. After six months of gang warfare in the building these juvenile delinquents were evicted and I got back the third floor, which I had bee using before this group moved in. The walls were full of holes and covered wit English and Chinese graffiti. There was broken furniture everywhere. It looked like the place had been bombed. I sent out an announcement, with a picture, inviting people to a one day viewing of an environmental exhibition by the Chinese Youth Alternative. This was an invisible work of mine. I claimed the space and presented it as a work of art. It was a ready-made installation, a piece of real life that became art in the context of an art museum. (Marioni 2003: 112-13) 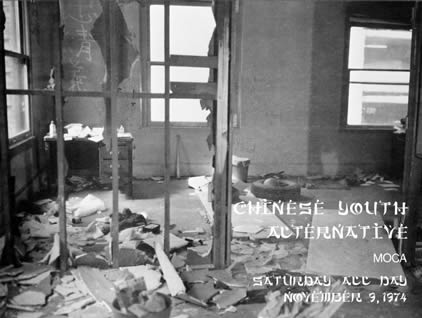