Byars' works find their source in philosophy and theology rather than visual perception. The artist and poet William Blake once stated, "The eye envies the mind." Byars empathizes with such sentiments. His calculated actions and images serve primarily as extensions of his writing, the focus for which is the refining of his thoughts into concise written declarations and questions. As philosophical inquiry, his writings are Zen in character, defining themselves somewhere between a Haiku poem and a Zen riddle or Koan. A phrase such as "How Do You Do Shakespeare?" has taken the form of a book in which this simple question-or "pure thought," as Byars refers to it-comprises the entire text. Byars has also translated some of these single sentence thoughts into brief one act plays.

The Perfect Kiss […] is one such translation. He refers to the piece as being simultaneously "a prayer a poem and a play." Byars has chosen the lobby of the Museum as the stage for the works' enactment. The piece consists of Byars, dressed in black, entering the Museum lobby and stationing himself in a spot-lit corner of the room. He faces the lobby entrance and forms a kiss with a subtle gesture of his lips, after which he quietly leaves the room.

The performance is surprisingly brief, and appropriately so. The Perfect Kiss is a single poetic idea translated into a brief poetic act. Speaking of the work, Byars remarks, "It is a mystical expression of my appreciation of the world." For Byars, to belabor this idea with extended narrative action would be to detract from the purity of the message. He is intent to leave us with a quiet philosophical moment naked of special physical skills and modern technology. He is not an entertainer. Byars has proposed that the Museum store The Perfect Kiss in the Museum as a form of knowledge, and that the piece be repeated at some appropriate time in the future by a member of the Museum staff.

Byars establishes his presence in the space in spite of the reductive character of his actions. In effect, his attire becomes a formal element of the work that helps to establish a specific mood for the plays enactment. Characteristically, he dresses in a single color wearing a suit, Pilgrim hat and gloves. He has dressed similarly in solid gold and red for previous works. The Perfect Kiss is done in black. Byars' wardrobe and color choices are more an expression of personal liturgy than stylistic trademark. Black being a color of high ceremony, The Perfect Kiss functions as quiet, elegant ritual.

Byars states, "I'm a mystic." More accurately, perhaps, he is a romantic visionary attempting to implant a sense of philosophical and religious fantasy into our tense emotionally repressed and matter-of-fact environment. If his works appear surrealistic, it may be because his simple spiritual message is in bold contrast to a culture which appears to thrive on complex structures and solutions. (Auping 1978) 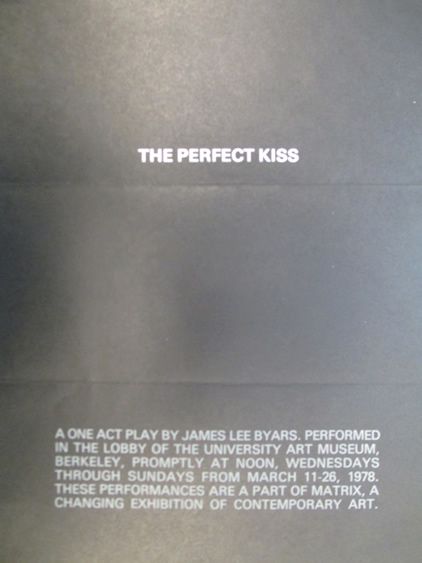