On 17 July 1980, I received a letter from a man named Tom Chapman, challenging me to a fight, to be determined by standard (California) boxing procedures, saying that “it would not be fun” and “the best illusion is no illusion.” HA! What a joke. I certainly didn’t like that and it made me so mad that I accepted. (…LIKE IN THE ANIMAL KINGDOM, DOMINANT MALES DON’T START FIGHTS, THEY WAIT TO BE CHALLENGED.) It meant not only agreeing to fight this man, but the opportunity to become someone else. It required a certain discipline, as unorthodox as possible in every way. It meant that anything he would do in preparation for the fight, I would do different. A way to keep unpredictable and detached from him. I even refused to cut my hair (although it badly needed it) and not just because of the Samson Syndrome, but also, because his was short and neat, I wanted the opposite. I wanted to constantly remind myself that in no way was this a collaboration. I have nothing against collaborations, but in this particular case my position was a reactionary one. To me it was always a “group show”. We (fighters, promoters, etc.) all had roles, decisions to make separate from the basic concept, so, it is my belief that the “originator,” in this case Tom, acted as a sort of “curator” by selecting me for instance as his opponent and not a real boxer (I mean, if he wanted the “real stuff,” why me?), but that would have taken guts, and he lacks plenty in that department. It was my piece from the moment I accepted the challenge […]

The place, Kezar Pavilion, the ring was the same one where Rocky Marciano had fought a championship fight. It was old and battered and filled with bloodstains. The padding was so thick it felt like walking on sand, pathetic, but, this ain’t Caesar’s Palace. Now talk about the fight, AHI SI QUE SE JODIO LA COSA! Imagine trying to do a piece, while at the very same time someone is trying just as hard to stop you from doing it. A constant level of competition that doesn’t really exist in the “art world,” or shouldn’t, and in the midst of all this competition, WINNING WAS EVERYTHING. (Labat 1981: 19)

Eventually the night of the fight came. It had to be an entire evening, because California would only sanction something like 26 rounds; it was around 8 fights. It was at Kezar Pavilion, and I was not announced as an artist or anything like that; I was just there with the other boxers. The two women boxers fought that evening, and on top of that, I got Carol Doda – who was the first silicone-implanted topless dancer – to be the round girl, the one that carries the numbers […] There were over 1,000 people at the fight, and there were cameras everywhere. The boxing crowd was looking around like, “What’s the big deal?” They never got that kind of attention at a local boxing evening night. And then they see all these punks and other types coming in, and they don’t get that. Then they see the art world coming in – the collectors and well-dressed people. That was my favourite part, just to look out into the audience to see people just kind of looking at each other, checking things out. You know, why is there a punk band doing the national anthem at a local boxing match? 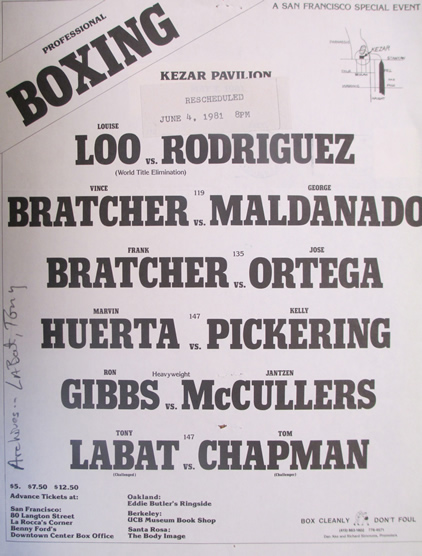