This event was one of a series of site projects curated by Suzanne Foley as part of the San Francisco Museum of Modern Art’s presentation of America, 1976, a bicentennial exhibition. I was looking for a situation in which a social activity (in this case, the ferry ride) could serve as a vehicle for investigating the nature of experience as art. I selected Angel Island, a public park in the San Francisco Bay, because I had made a film there in 1974. This film became the ‘score’ for the subsequent event.

Coming and going: Angel Island will result in an edited version of a 3-minute film D’Agostino made of a walk from the top of Mt Livermore on Angel Island, to the ferry and back to San Francisco. On Saturday, October 29, 50 people will be given segments of the film and will retrace the walk in reverse. Each will find the place where the segment was taken and then return the strip to D’Agostino, who will splice the strips together in the order in which he receives them. Both the original film and edited version will be shown at 3.30. 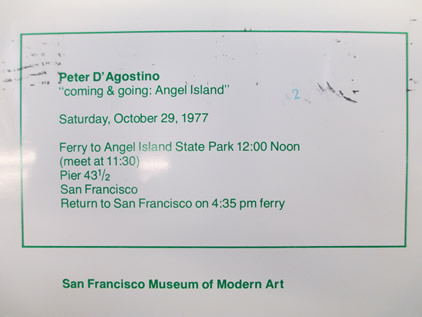