Palace of Fine Arts at Marina and Lyon Streets

The King came first, when I wanted to see what my male self would be like, who he would be. And I realized my bearded self was a king – a dead ringer for Charlie One – and kings must have a country, a kingdom – even if a lost one. He became my political self. (Antin 1999: 212)

In her earliest lifelike performances as the King (beginning in 1972), Antin puts on “a false beard, a grand chapeau, a velvet cape, and leather boots over denim jeans” and strolls around Solana Beach (in northern San Diego County) to converse with unsuspecting passers-by as subjects in his kingdom. While Antin adopts masculine signs (the beard, the kingly garments) and a regal attitude as the King of Solana Beach, she does not fully alter or disguise her feminine-marked figure—in one of her portraits as the King, her cleavage is tantalizingly visible. Her impersonation plays with the juxtaposition of a residual self (traces as female) and an other self (the King) as a histrionic add-on. This juxtaposition visually mocks the limits of a gendered self, undermining its socially assumed fixity to turn it into a playful performance. Most intriguingly, Antin carries on her transformation without erasing her own personal identity as a Jewish woman. Thus, her performance of autobiographical fictions stands as one of the earliest feminist works to investigate the intersection of gender and ethnicity. (Cheng 2002: 42) 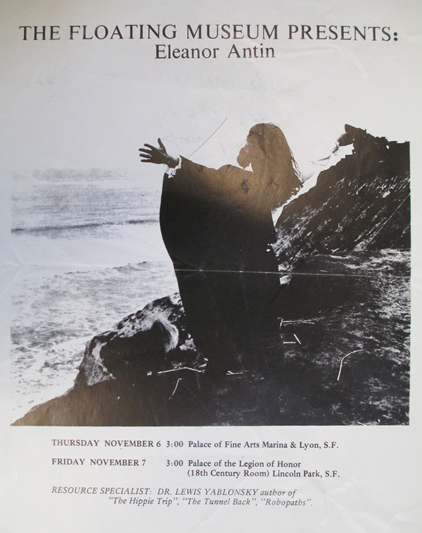